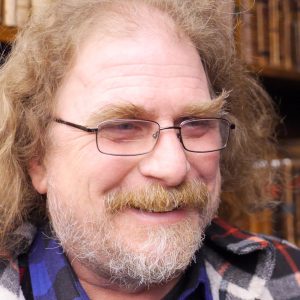 Justin Champion is Professor of the History of Ideas at Royal Holloway, University of London. He currently serves as president of the Historical Association.

Justin has published extensively on seventeeenth- and eighteenth-century radical thought, with particular expertise in the history of ideas, religious politics, and the works of enlightenment philosophers such as Thomas Hobbes, John Locke, and John Toland. He is known for using images and literary texts alongside historical sources in exciting and innovative ways.

In his capacities as both President of the Historical Association and Professor of the History of Ideas, Justin is a huge advocate of public engagement and open access. Justin’s first book The Pillars of Priestcraft Shaken (1992) can be accessed freely online here and his book Republican Learning: John Toland and the Crisis of Christian Culture, 1696-1722 (2003) can likewise be found free here. He is currently preparing an edition of Hobbes’s writings on religion for Oxford University Press.