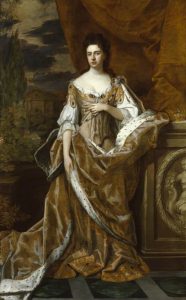 Anne (1665-1714) was born to James, Duke of York (1633-1701) and his first wife, Anne Hyde (1637-1671) on 6 February 1665. On 28 July 1683 Anne married Prince George of Denmark (1653-1708), as part of an Anglo-Danish alliance to curb the naval dominance of the Dutch. Because her sister, Mary (1662-1694) lived in Holland, Anne became the highest ranking protestant member of the royal family in England upon her father’s accession in 1685. As his plans for a revived Catholic state developed, Anne increasingly became the focus of protestant attention. In 1688 Anne perpetuated, or perhaps even invented, the rumours that the new born prince James Francis Edward (1688-1766) was spurious. Anne was aware of William’s planned coup before she left London on 25 July, and, on 25 November, escaped from Whitehall with her friend Sarah Churchill (1660-1744) and formally defected to William.

Like Mary, Anne suffered obstetrical difficulties throughout her life. Of her seventeen pregnancies, eleven resulted in miscarriage and two in neonatal death. Only one of Anne’s children survived infancy, William, Duke of Gloucester (1689-1700). Yet William was a sickly boy and died, probably from pneumonia, in 1700. Anne’s failure to produce an heir resulted in William’s passing the Act of Settlement in 1701, which stipulated that, upon Anne’s death without an heir of her body, the throne should pass to her protestant cousin Electress Sophia of Hanover, and thereafter to the House of Brunswick. The War of the Spanish Succession (1702-1713) was to dominate foreign policy throughout Anne’s reign. Yet it must be remembered that this war against Louis XIV, who harboured James Francis Edward Stuart and his court at Saint-Germain, was also a war for the protestant British succession too.

Anne was well known for her support for both the established Church of England and the Tory party. During William’s reign this had made her an oppositional figure, fostering an alternative court at Piccadilly, towards which opponents of William gravitated. Anne was greeted as a native English queen after William’s foreign reign, and was immediately popular with Tories, who welcomed renewed Stuart rule. That said, Anne was certainly no Jacobite: popery was anathema to her.

Unlike her sister, Anne cultivated her duties as queen regnant. Although policy was mostly directed by the dominant politicians of the age, Sidney, Lord Godolphin (1645-1712), John Churchill, Duke of Marlborough (1650-1722), and Robert Harley, Earl of Oxford (1661-1724), Anne made her preferences known and exercised control over her ministry. The succession question loomed large over Anne’s final years. Some politicians corresponded secretly with James Francis Edward, pressing him to convert to the Church of England and claim the English throne. Others lobbied for the peaceful implementation of the Act of Settlement. When Anne died on 1 August 1714, a messenger was immediately dispatched to Hanover to request that Georg Ludwig (1660-1727) leave for England as soon as possible. All preparations had been made for a smooth transfer from the House of Stuart to the House of Brunswick.