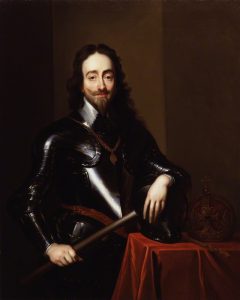 In 1612 the militantly protestant Henry died suddenly from typhoid, sending shock waves through the court. Whereas Henry had been a promising heir, Charles was a sickly child and many thought it unlikely that he would survive to adulthood. Princess Elizabeth was promptly married to Elector Frederick V of Bohemia (1596-1632) in 1613. A foreign succession to the British throne seemed possible by their marriage. Nonetheless, Charles survived and cultivated his duties as the sole male heir, including patronage of the arts and participating in the elegant court masques of Ben Jonson and Inigo Jones. As war escalated in Europe, a protestant and Catholic union became increasingly necessary to establish peace. After a disastrous courtship of the Spanish Infanta Maria Anna (1606-1646), Charles eventually married the French princess Henrietta-Maria on 11 May 1625, shortly after his accession to the throne on 27 March 1625. The couple had nine children, of whom six survived infancy, including the future kings of Britain, Charles II (1630-1685) and James II (1633-1701).

Charles fashioned his accession in terms of continuity with his father’s reign. However, Charles’s regime was troubled from the start. His marriage to a Catholic proved deeply unpopular with the protestant English. Partly to appease the rabid anti-Catholic wing of his parliament, partly to aid his sister and the protestant Elector Frederick, Charles promptly reopened war with Spain, but achieved few of his objectives due to parliamentary opposition. In 1629 Charles ended his wars, did not recall parliament, and began a decade of ‘personal rule’, in which time the court flourished and became a great centre of the arts under figures such as Van Dyck.

However, a growing crisis in Scotland forced Charles to call a parliament in 1640. Aggrieved by promises broken by the king during the previous decade, in 1641 parliament quickly passed a bill that removed Charles’s right to dissolve it without its consent. After extensive but unsuccessful efforts by Charles to appease his new parliament, civil war broke out in Ireland in October 1641 and soon spread through Scotland and England. Captured at Oxford by parliamentary forces in 1646, Charles was publicly executed outside Banqueting House in Whitehall on 30 January 1649.