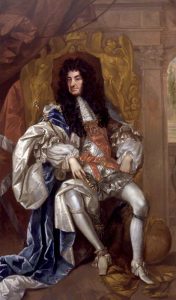 Charles spent most of the civil wars in Oxford with his father, leaving in 1645 to lead the royalist forces in the west country. In March 1646 Charles fled to the country, settling with his mother at the French palace of Saint-Germain near Paris. After his father’s execution in 1649, Charles was proclaimed King of Scotland by the Scottish parliament, and returned to Scotland to negotiate a settlement between the royalists and the Scottish presbyterians. He was crowned at Scone by the kirk on 1 January 1651. Late in 1650 Oliver Cromwell (1599-1658) led the English parliamentary forces north in the hope of occupying Scotland. Cut off from their northern supply lines by Cromwell, Charles led the army south to Worcester, where they were caught and defeated by Cromwell’s superior force. Charles famously escaped from the battle and Cromwell’s search party by hiding in the oak tree at Boscobel. He eventually escaped to France in October 1651, where he remained until the monarchy was restored to England in 1660.

After Cromwell’s death in 1658 and the military coup of April 1659, plans for Charles’s restoration were laid by royalist spies. After tense negotiations with the Convention and the New Model Army, the declaration of Breda was issued on 4 April 1660 and delivered to Charles. On 23 May he sailed for England, and triumphally entered London on 29 May.

The first fifteen years of his reign were characterized by war with the Dutch United Provinces for control over maritime trade routes. The last decade of Charles’s reign was fraught by the issue of succession. In 1662 Charles had married the Catholic princess Catherine of Braganza, but, despite Charles fathering several illegitimate children by his mistresses, the marriage resulted in no children. Thus Charles’s brother, James, Duke of York (1633-1701), would inherit the crown after Charles’s death.

This was problematic. James had publicly converted to Catholicism in 1673. The prospect of a Catholic monarch was unpalatable to much of the protestant English population, who were fearful of absolute rule akin to the that of Louis XIV (1638-1715) in France. In the words of the English MP, Sir Henry Capel, ‘From popery came the notion of a standing army and arbitrary power […] Formerly the crown of Spain, and now France, supports this root of popery amongst us; but lay popery flat, and there’s an end of arbitrary government and power.’ Thus a faction led by Anthony Cooper, Earl of Shaftesbury (1621-1683), introduced a bill in the Commons to exclude James from the lines of succession. A fringe group within the faction instead supported the claim of Charles’s illegitimate Protestant son, James Scott, Duke of Monmouth (1649-1685). When it seemed likely that the Commons would pass the bill, Charles dissolved parliament. And when successive parliaments tried to pass the bill again, they were likewise dissolved.

Exacerbating anti-Catholic feeling with propaganda and manufactured conspiracies, Shaftesbury’s followers—by now known as the Whigs—used such anti-Catholicism to attempt to force the bill. In 1681 the bill passed the Commons but was defeated in the Lords, dominated by James’s supporters, who became known as the Tories. Charles died on 6 February 1685, having converted on his deathbed to the Catholic church. His brother succeeded him to the British throne. 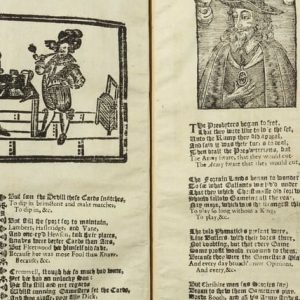