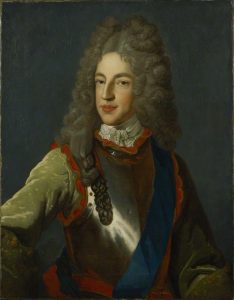 James Francis Edward Stuart (1688-1766) was born to James II (1633-1701) and his second wife, Mary of Modena (1658-1718) on 10 June 1688. His birth was a matter of national controversy. Mary had not conceived in five years, and James had no male heir to continue his Catholic programme in England. After his death, the throne would pass to his protestant daughter, Mary (1662-1694), and her protestant husband William of Orange (1650-1702). A male heir would supersede their claim. Hence, when James christened his new born son in the Catholic church, a Catholic succession to the British throne seemed likely, much to the chagrin of British protestants. A rumour promptly circulated—possibly started by Princess Anne (1665-1714)—that James Francis Edward was an illegitimate child. They claimed that he was a low born baby smuggled into the queen’s chamber in a bed warming pan. This was patently false. But, under the pressing threat of a Williamite coup, James sent his Catholic son and wife to seek refuge in France, where Louis XIV (1638-1715) granted them the palace of Saint-Germain, where the prince remained for the next twenty-four years.

Upon his father’s death in September 1701, Louis proclaimed James Francis Edward king of England, Scotland, and Ireland, in direct contravention of the treaty of Ryswick (1697). With military support from France, James attempted an invasion of Scotland in March 1708, but his landing was foiled by bad timing and bad weather.

After a period serving in the French army, as his father had during the interregnum, James began corresponding with the Tory ministry in England. Secret negotiations were undertaken: if he converted to the Church of England, the Tories would support his claim to the throne after Anne. But James refused to compromise his religion. In 1713, as a condition of the peace treaty of Utrecht, James was expelled from France.

After Anne’s death and the peaceful accession of George I (1660-1727), James began plotting with his exiled supporters, known as Jacobites, for another attempted invasion of Scotland. After the death of Louis XIV, the French refused to aid the expedition. But the Scottish rallied behind ‘James III’. On 26 August 1715, the Jacobite standard was raised in the highlands, and, on 22 December, James landed at Peterhead. The rebellion collapsed in February 1716, and James escaped back to Europe.

Further coups to restore the Stuarts to the British throne were planned in 1719 and 1722, but came to nothing. In 1745, James’s son, Charles Edward (1720-1788) led another Scottish rebellion. It was more successful than his father’s attempts. But ultimately the ’45 ended in defeat too. This was the final attempt by the exiled Stuarts to win back the throne of Britain. James died on 1 January 1766 at the Palazzo Muti in Rome. He was buried in the basilica of St Peter’s.