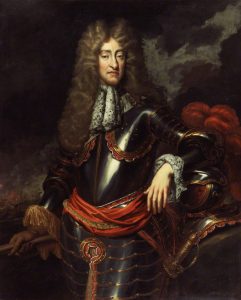 James II and VII (1633-1701) was born the third child and second son of Charles I (1600-1649) and his French consort Henrietta Maria (1609-1669). James spent much of his youth with his father at Oxford during the civil wars, before he was captured and taken prisoner to London. In April 1648 James escaped to the United Provinces and then to Saint-Germain, were he was reunited with his mother and brother Charles (1630-1685). James gained valuable experience as a tactician and solider after enlisting in the French army in 1652, experience that would prove useful while Lord High Admiral during the Anglo-Dutch wars of the 1660s and 1670s. He returned to England with his brother in May 1660, and married Anne Hyde (1637-1671) on 3 September 1660, after she became pregnant. Of their eight children, only two survived infancy: Mary (1662-1694) and Anne (1665-1714). But James also fathered many illegitimate children by numerous mistresses.

At some point in the 1660s James secretly converted to Catholicism, but maintained his outward conformity to the Church of England. After the introduction of the Test Act in 1673, which prohibited Catholics from holding public office, James resigned as Lord High Admiral and thus made his conversion public. On 30 September 1673 he married a new Catholic bride, Mary of Modena (1658-1718), and, in 1676, the pope acknowledged his conversion. This alarmed the protestant parliament, particularly in the midst of the anti-Catholic hysteria conjured by the Whigs and their cronies, most notably rogues such as Titus Oates who manufactured the hoax Popish Plot between 1678 and 1681.

The prospect of a Catholic monarch was unpalatable to much of the protestant English population, who were fearful of absolute rule akin to the that of Louis XIV (1638-1715) in France. In the words of the English MP, Sir Henry Capel, ‘From popery came the notion of a standing army and arbitrary power […] Formerly the crown of Spain, and now France, supports this root of popery amongst us; but lay popery flat, and there’s an end of arbitrary government and power.’ Thus a faction led by Anthony Cooper, Earl of Shaftesbury (1621-1683), introduced a bill in the Commons to exclude James from the lines of succession. A fringe group within the faction instead supported the claim of Charles’s illegitimate Protestant son, James Scott, Duke of Monmouth (1649-1685). When it seemed likely that the Commons would pass the bill, the king dissolved parliament. And when successive parliaments tried to pass the bill again, they were likewise dissolved. In 1683 a group centred on the radical Algernon Sidney plotted to assassinate both Charles and James as they travelled from Newmarket to London. The royal party left early and the attack never took place, but the Tory government discovered the plans, arrested the conspirators, and executed the major players.

Despite the efforts of exclusionists, James acceded upon his brother’s death on 5 February 1685. He was plunged into political crisis. On 11 June 1685, Monmouth landed at Lyme Regis in Dorset, rallied a rebel army, and marched on London. Monmouth’s army was defeated at Sedgemoor on 6 July 1685, and was executed for treason on 15 July. But discontent with James’s Catholic rule and his programme of centralized government remained widespread.

Historians have disagreed about whether James’s policies of religious toleration or his attempts to centralize the state caused more discontent. Either way, Whig circles had been plotting for some time with James’s heirs apparent, his eldest daughter Mary and her husband, the Dutch stadtholder and James’s nephew William of Orange (1650-1702), to overthrow the regime. When Mary of Modena bore James a son on 10 June 1688, James Francis Edward Stuart (1688-1766), and when James baptised his son as a Catholic, the crisis came to a head. A cabal of Whig politicians known as the Immortal Seven formally invited William to invade. The Dutch fleet landed at Torbay in Devon on 5 November 1688, and James fled to France on 23 December, meeting his wife and new born son, whom he had sent in advance. In exile, James was granted the palace of Saint-Germain by Louis XIV. In March 1689 James attempted an invasion via Ireland, but was routed by William’s army at the Boyne on 1 July. James died on 16 September 1701, without another attempt to regain his kingdom.