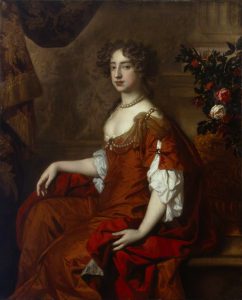 Mary II (1662-1694) was born on 30 April 1662 to James, Duke of York (1633-1701) and his first wife, Anne Hyde (1637-1671). The deaths of her mother and infant brother Edgar (1667-1671) in 1671 made Mary the second in the line of succession, after her father. Mary’s marriage thus became crucial to the future of the British crown. Although Mary’s Catholic father was against the match, Charles II and his protestant counsellors pressed William of Orange (1650-1702), Mary’s first cousin and a militant protestant, as a suitable husband. The arrangements were finalized in the autumn of 1677, and Mary was informed, ex post facto, on 21 October. Mary miscarried two children in 1678 and 1679, and apparently never conceived again. This was a blow to the protestant succession of Britain. In Mary, the Stuart dynasty was at a dead end.

Mary was devoutly protestant, and resisted James’s attempts to convert her to the church of Rome. Hence she supported her husband’s attempt to curb her father’s Catholic programme in Britain. Mary followed William to England in February 1689, and was crowned queen regnant on 11 April at Westminster Abbey. Although the coronation emphasized the importance of William and Mary as dual sovereigns, the reality was that William held all the power. When he left for Ireland in 1690 to defend against James’s attempted invasion, William attempted to vest his power in a select council rather than in the queen. This measure failed, though, and the Regency Act was passed asserting that ‘whensoever and so often as it shall happen that his Majesty shall be absent out of this realm of England it shall and may be lawful for the Queen’s Majesty to exercise and administer the regal power and government of the kingdom’. Yet in the frequent event of William’s absence from England, Mary was effectively a pawn of the governing council he established.

In any event, Mary was not long for this world, and died on 28 December 1694. For James’s supporters, the Jacobites, Mary’s death was divine censure for her betrayal of her father. For William’s supporters, on the other hand, the queen’s death was a punishment on the nation for its sins. Betraying her father and new born brother to support her husband’s coup, Mary had effectively thrown the succession to the British throne into limbo.