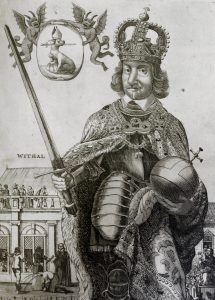 In the 1630s Cromwell lived a quiet life as a minor gentleman farmer. This decade saw his conversion to radical puritanism. In 1640 Cromwell was elected MP for the city of Cambridge. The circumstances of his election are unclear. He came to play a prominent role in parliament, sitting on multiple committees, pushing for religious reform.

When, in July 1642, Charles I (1600-1649) begged the Cambridge colleges to loan him their wealth to pay his army, Cromwell moved quickly to prevent them from doing so. He boldly took Cambridge Castle, and thus seized control of the college’s money and the city’s arms. In 1643 Cromwell was promoted to colonel. In this role he displayed an aptitude for strategy and battle, despite his lack of training in the art of war. On 2 July 1644 Cromwell commanded the left wing of the parliamentarian army at Marston Moor, perhaps the greatest battle of the civil wars. During 1645 and 1646 Cromwell acted as lieutenant-general of the New Model Army, under the overall command of Sir Thomas Fairfax (1612-1671).

In July 1646 Cromwell returned to Westminster, where he was involved in high-level negotiations between parliament and the royalists. Negotiations failed, partly because the brokered settlement with Charles was unacceptable to large sections of the army, partly because Charles had his head in the sand. After further bouts of civil war in 1647 and 1648, Cromwell return to the negotiating table. But Charles would not concede. The king was tried in 1648, and executed on 30 January 1649. Cromwell was one of those who signed his death warrant. He was now the most powerful man in England.

The path from regicide to Lord Protector was neither quick nor easy. During 1649 to 1651 Cromwell campaigned against the last bastions of royalism in the north, in Ireland, and in Scotland. He returned to Westminster in 1651 and dissolved the Rump Parliament in 1653. At this stage Cromwell may have been considering becoming king. Instead, after lengthy negotiations with various committees and councils, Cromwell was announced ‘Lord Protector’.

Despite the title, Cromwell was king in all but name. He resided at Whitehall and Hampton Court. His daughters took the title of ‘princess’. By 1656 he was dubbing knights. In 1657, when the constitution required his second investiture as Lord Protector, he sat in the coronation chair used since 1308. The ceremony moved to Westminster Abbey, and adopted aspects of the coronation ceremony.

Cromwell’s death was not sudden. The last few months of his life were troubled by infection and pneumonia. Cromwell had the responsibility of nominating his successor. He failed in his duty: there was no written designation. But, in lieu of written documentation, it appears that Cromwell nominated his eldest surviving son, Richard, in his final hours. An effigy of Cromwell lay in state at Somerset House, with a crown just above its head.

The succession was not simple. Richard had served in parliament, but was neither a skilled politician nor a soldier. Richard’s weaknesses eventually led to his capture and deposition by General Monck (1608-1670) in the spring of 1659. The restoration of the Stuart monarchy followed soon after. On 30 January 1661 Cromwell’s body, together with those of the other regicides, was exhumed and desecrated by the vengeful Stuart authorities.