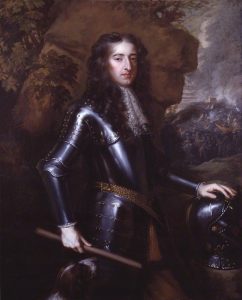 William was appointed stadtholder in 1672, and used both his position and his considerable skills as a solider and strategist to contain France during the wars of the 1670s. Anglo-Dutch relations were fraught throughout the 1660s and early 1670s, although they improved in 1677, when William married his cousin and James’s daughter, Mary (1662-1694). In 1680 William sided with the Whig faction that sought to exclude James from the line of succession. And from 1681 he remained in contact with leading Whigs such as William, Lord Russell, who was executed for treason in 1683. Charles II’s illegitimate Protestant son, James Scott, Duke of Monmouth (1649-1685), was suggested as an alternative claimant to the British throne by some Whigs. William received and entertained him in the United Provinces, much to the outrage of Charles’s and James’s Tory supporters at home.

Although William had nothing to do with Monmouth’s misguided attempt to seize the crown from James in 1685, he probably began planning to invade England in 1687. William’s rationale for invading England was French containment. His uncles had sided with Louis XIV in past wars. He needed control of British foreign policy to aid his struggle against France. The decision to invade was made in May 1688, although whether William intended to seize the throne at this early stage is unclear. After the newborn James Francis Edward Stuart (1688-1766), whom William and his propagandists claimed was illegitimate, William and Mary were the next in line to accede anyway. William could have waited if he wanted to be king. More likely, he simply wanted to force James to change his foreign policy. But the king’s flight and implied abdication forced William to usurp his position. Whatever the complexities of the so-called Glorious Revolution, William and Mary were declared king and queen of England, Scotland, and Ireland on 13 February 1689, and were hurriedly crowned in Westminster Abbey on 11 April.

William’s first move as king was to bring British resources into conflict with Louis XIV. On 5 May 1689 England declared war against France with the intentions to reducing both the power and size of France to its 1659 borders. The Nine Years’ War (1688-1697) was not wholly successful in its aims, with heavy losses on all sides. The Treaty of Ryswick in 1697, the culmination of nearly a decade of war, was disappointing. Louis kept most of his gains and still harboured the Jacobite court at Saint-Germain. Moreover, the war-weary parliament argued that a standing army was a drain on national resources and, claimed most Tories, a threat to English liberties. The professional might of the English forces was seriously compromised in the process.

A Calvinist by birth, William converted to Anglicanism upon taking the British throne. The defence of the protestant religion in Europe was William’s modus operandi. War with Catholic France was one means of achieving this. Securing the protestant succession to the British throne was another. Succession was a vexed issue for William. The Bill of Rights passed in 1689 held that ‘it is inconsistent with the safety and welfare of this Protestant kingdom to be governed by a papist prince’. Thus the throne would pass after William and Mary to their children, then to Mary’s sister, Anne (1665-1714), and her heirs, and, thereafter, to any heirs of William by a later marriage should Mary predecease him. Mary died childless in 1694 and William did not remarry. Thus the succession rested in Anne and her only surviving child from eighteen pregnancies, William, Duke of Gloucester (1689-1700).

When William died from pneumonia in 1700, Anne became the lone claimant in the protestant line of succession. Thus William’s final years were devoted to renewed negotiations for war with France and for securing the protestant succession of Britain. William did not survive to see the first salvos of the War of the Spanish Succession (1702-1713). But he did implement the Act of Settlement in 1701, which stipulated that, after Anne’s death without an heir of her body, the throne should pass to her closest protestant cousin, Sophia, Electress of Hanover, and thereafter to the House of Brunswick. William’s last act, before succumbing to pneumonia after a fall from his horse, was signing a bill against James Francis Edward’s accession.