This is a single lesson that could either be used as an introduction to Restoration England, or in completing a study of the Civil War and Commonwealth period allowing students to assess how warmly Charles II was welcomed as King.

Where students are already familiar within the Civil Wars and abolition of the monarchy, the enquiry seeks to consolidate this knowledge by encouraging students to speculate about the image that Charles would wish to present and then to examine and explain how these messages were conveyed and how they were received, drawing inferences from a range of sources. It alerts students to the variety of opinions in England – helping them to appreciate both the strength of the celebration and the anxiety that dissenting Protestants (Presbyterians and Independents, in particular) felt, especially in London.

This enquiry relates closely to the film The Royal Entry of Charles II, 1661.

It could also lead specifically into a comparative analysis of James I’s entrance to the city, discussed in The Royal Entry of James I, 1604 and more extensively into comparisons across the whole period, looking particularly at the use of pictorial imagery in defending the accession of William and Mary, as discussed in Coronation Medals and Stuart Iconography.

Students following the A-Level AQA ‘Stuart Britain; The Crisis of Monarchy 1603-1702’ might study each entry in detail as they reached the relevant period. However, it might be more helpful for students to examine the different celebrations all together, analysing the messages deliberately presented at each of these transition points as part of an over-arching analysis of the extent and nature of change and continuity across the whole period; for example, comparing the entrance of James I into London in 1604 with that of Charles II in 1661 for example, and contrasting that with the iconography used in medals celebrating the accession of William and Mary in 1689 or Anne in 1702, asking how similar or different their purposes and messages were.

The enquiry could also be taught as an introduction to the GCSE OCR A unit ‘Restoration England 1660 to 1685’. The extent to which students would be able to predict the King’s likely priorities would obviously depend on their prior study of the Civil Wars and the Protectorate. Where students lack such prior knowledge, the images in the first Triumphal Arch might be used initially to establish an agenda for the first few lessons of the unit: what can we learn from the nature of the procession and from the images used about Charles predecessors? What more do we need to know to make sense of the claims that he was making?

A simplified version of the prediction, design and investigative task outlined here might also be suitable for Key Stage 3 students who have studied the Civil War and Commonwealth.

The idea of the King’s return could be introduced in a variety of ways, depending on students’ prior knowledge. If they have very little knowledge about the Civil War and Commonwealth then the whole task could be adapted so it sets the agenda for finding out about that previous period (see below) but here it is assumed that students do have some prior knowledge and that the introduction needs to prompt the students to think about the image that Charles will want to project as he returns – and particularly as he processes through London on the eve of his coronation.

You might begin with some of the most positive reactions to his arrival in England (Reactions A, B and C in the collection) – asking students to examine one or all of them and sum up the attitudes that they convey, then ask whether they think everyone in England would have been as welcoming. (These sources all come from the texts section of the website – and for the ballad England’s Pleasant May Flower you can find a link to a facsimile of the broadside and to a recording of the song.)

You might focus from the beginning on the issue of how the king would present himself in the city of London, perhaps by looking back at early work on the Civil War and asking which parts of England might be expected to be more or less welcoming.

A third option might be to focus, as some contemporaries did, on the contrast between Charles’ departure from the country and his return. Among the texts related to Charles II is a poem by Rachel Jevon that specifically contrasts Charles’ previous flight from the country with his return. While the poem itself may be inaccessible to most students, the idea of contrast – sketching out the circumstances of each and perhaps asking students to generate two different sets of adjectives that a loyal poet might use to describe each occasion (or – more simply to select between possible adjectives suggested to them) could help to highlight the contrast and help students to focus on the image that the King would want to convey. 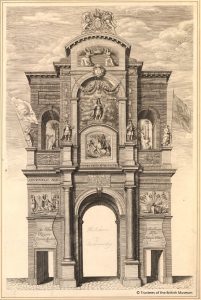