This is a single lesson enquiry that uses everyday objects and apparently simple images to introduce the essentially extraordinary diversion of the Stuart line of succession from James II’s son to his elder daughter, Mary and her husband, William. It is intended to prompt students’ curiosity about why this happened and why there was support for it.

The enquiry focuses on the use of artefacts as sources of evidence, looking both at the meaning of the images – how we can work out what the plates are actually saying – and at what we can infer from other knowledge about the manufacture and sale of these items to tell us about the kind of people who bought them and why they did so. It explores how quite simple images were designed to convey what could be quite complex messages.

This lesson has been developed with close reference to the film Delftware: Popularising the Monarchy. (The film here is treated as a resource for the teacher rather than the students – since it tells the viewer many of the things that you might be hoping the students would work out for themselves through inference and in light of the information that you supply as they begin to pose questions.) The use of visual images to convey political messages about the monarchy is also discussed in detail in the film Coronation Medals and Stuart Iconography.

This lesson, built around a small number of commemorative plates, is intended for Key Stage 3 students as an introduction to the revolution of 1688-89. It assumes that the students have previously learned about the Civil War and execution of the King (and perhaps about Cromwell’s refusal of the Crown) and about the restoration of the monarchy under Charles II – and points them towards the dramatic constitutional changes that led to the Act of Settlement under William III and the Act of Union under Queen Anne.

Start with an image of a relatively recent commemorative cup or plate – associated with the queen’s diamond jubilee, for example, or perhaps her ninetieth birthday. The collection of images to download includes an example of a commemorative cup from the Queen’s silver jubilee in 1977, but it would be much more effective if you have an example of your own to bring in – or had students in advance to bring in or take photographs of any such commemorative souvenirs that they have at home. Model the process of asking questions of the mug or plate as a source of evidence both about the monarch depicted and about the kind of people who might buy such souvenirs – as well as the process of making deductions about methods of manufacture and cost from what they can see. Asking whether buying or owning or using such a mug necessarily marks you out as an ardent royalist may be helpful in drawing contrasts with the seventeenth century when such purchases were significantly more expensive.

This task is one in which the distinction between what we can actually see and what we can infer from it can be made very apparent – and you may want to ask students to record their ideas in two columns or in a layers of inference diagram, linking specific elements that they can see to the inferences that they have drawn from each of them. You might also choose to add a further column/layer asking how confident they can be about each of their inferences and on what basis. 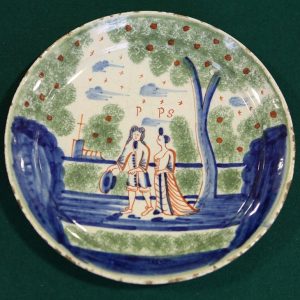 While this lesson has taken the delftware as the central source and worked out from it to ask about the views of those who bought it and the political developments that it seeks to commemorate and reinforce, you might want to work the other way round – charting the events of 1688/89 and then challenging students to find a way of summing up that change with a symbolic image that could be easily reproduced.