Home > Resources > Texts > John Webster, The Progenie of the Most Renowned Prince James, King of Great Britaine, France, and Ireland (1625; 1634) 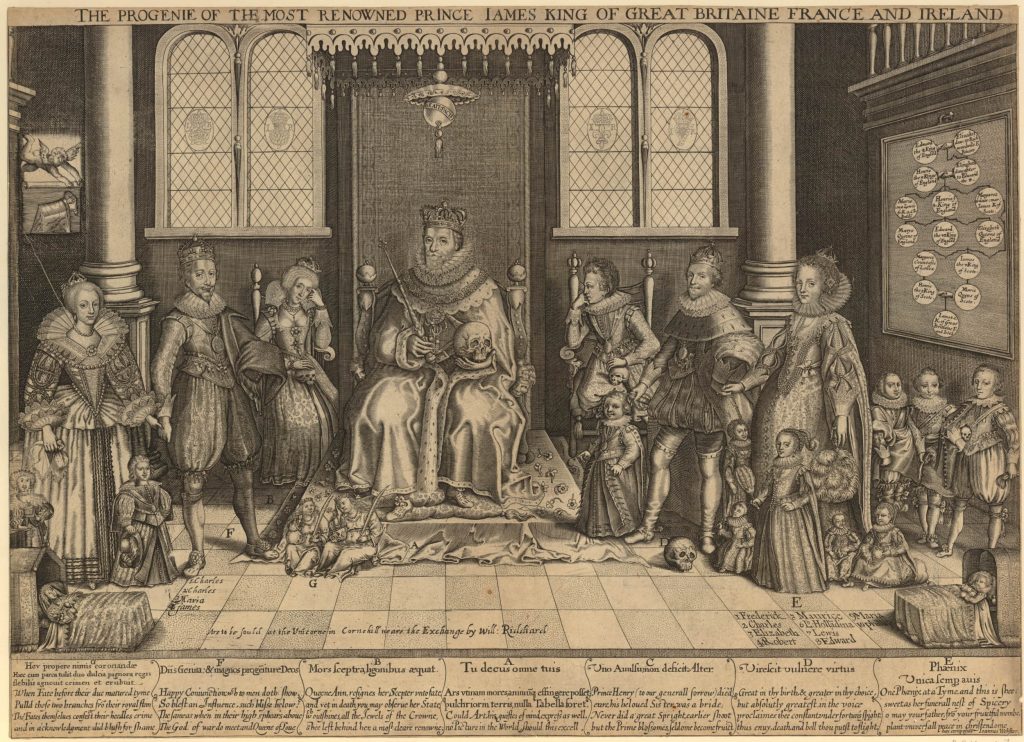 The Progenie of the Most Renowned Prince James, King of Great Britaine, France, and Ireland (1625; 1634). © Trustees of the British Museum.

This print depicts James I (1566-1625) seated on a throne in the centre, holding a spectre and skull, with his family on either side of him. On the wall to the right is a family tree from Edward IV (1442-1483) to James I. The print was probably made by Gerrit Mountin. At the bottom of the print are a set of verses by John Webster (1580-1634), which are transcribed below.

Because the infant Prince James (1633-1701) appears, we know that this impression of the print dates from 1634. However, the title suggests that an earlier state of the print, with the verses by Webster, was published in the lifetime of James I. It had recently been argued by Webster’s most authoritative editors, David Carnegie and David Gunby, that the original print and poem date from 1625, on the occasion of Prince Charles (1600-1649) to Henrietta Maria (1609-1669). This later version gives skulls to all those who have died.

In 1625, this print would have been designed to emphasize the legitimacy of the Stuart line (via the family tree on the right of the picture), and to celebrate its future. Webster’s poem reinforces this interpretation. He celebrates Princess Elizabeth’s ‘fruitful womb’ and, in commemorating the marriage of Charles and Henrietta Maria, envisages their ‘Happy Conjunction’ as a fruitful one.

The print was probably reprinted in 1634 to mark the birth of Charles’s and Henrietta Maria’s second son, James.

A [King James] Tu decus omne tuis
Ars utinam mores animumque effingere posset;
Pulchrior in terries, nulla Tabella foret.
Could Art, his gifts of mind, express as well,
No Picture in the World, should this excel.

B [Queen Anne of Denmark] Mors sceptra, ligonibus aequat.
Queen Anne, resigns her Sceptre unto fate,
And yet in death, you may observe her State,
Which outshines, all the Jewels of the Crowne,
She left behind her, a most clear renown.

D [Frederick, Elector Palatine] Virescit vulnere virtus.
Great in thy birth, and great in thy choice,
But absolutely greatest, in the voice
Proclaims thee constant, under fortune’s spite;
Thus envy, death, and hell thou puts to flight.

E [Princess Elizabeth] Phaenix
Unica semper avis.
One Phoenix as a Time, and this is she;
Sweet, as her funeral next of Spicery.
O may your father, from your fruitful womb,
Plant universal peace in Christendom.

F [King Charles and Queen Henrietta Maria] Diis Genita; et magnos progeniture Deos.
Happy Conjunction; which to men doth show,
So blest an Influence, such bliss below;
The same as when in their high spheres above
The God of war do meet and Queen of Love.